This month we had our staff workshop trip. Once again our boss asked us to write a report on what we did so he could send it to Changnyeong County Office. Here is my report....
Workshop Trip by Rebecca Rhone 2008
Monday 6th October
We set of from Changnyeong English Camp at 9.30 Monday morning. I was extremely excited about our trip. I had not been on a workshop yet and I have heard positive feedback from previous English Camp teachers. From the pamphlets I had read Hadong sounded beautiful. With stunning scenery and a fascinating history which was traditional and unique. After all the staff had greeted each other in the morning we made our way onto the bus. Suzie gave all of the staff a delicious pack lunch, which we were all grateful for.
We arrived at our first destination, which was Ssanggyesa Temple. Ssanggyesa Temple in Mt.Jirisan is the 13th of the 25 head offices of the Jogye Order of Korean Buddhism. The Ssanggyesa Temple and everything on its surrounding grounds was incredibly beautiful. The weather was pleasant and as it was the beginning of October. The seasonal change made a great impact on the appearance of the plantation. The colors were spectacular. Ssanggyesa Temple grounds had many monuments to admire. It also had an extremely interesting museum. I also really enjoy visiting the gift stores. All of the traditional Korean bits and pieces were so beautiful and distinctive. 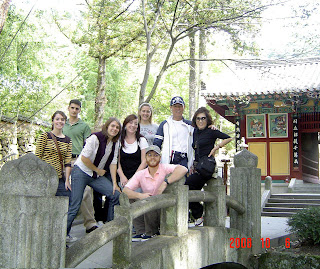 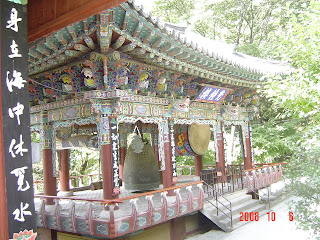 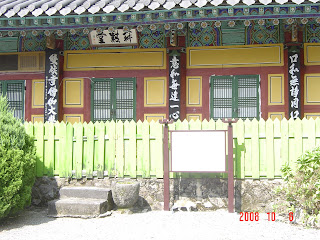 The Tea Cultural Centre was our second destination. Here is where the cultural tradition of cultivating and enjoying tea is handed down through the generations. The actual museum is not open on Monday’s but Richard and Suzie asked the manager and she opened it just for us. This was fantastic! The museum was lovely. It explained about the different methods used to produce many different kinds of tea from around the world. We also went into a tearoom and the owner served all of the staff with original green tea in traditional Korean pottery. It was a pleasant experience. I bought a petit vase, which I will use for a flower centerpiece for my apartment dinning table. I was pleased with my purchase. 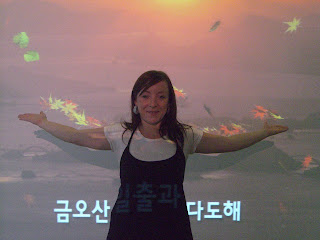 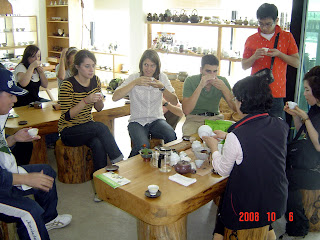 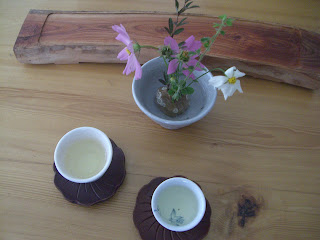 The third destination was Hwagae Market. It was a lovely traditional outdoor food market. There was charming traditional Korean souvenirs which were tremendously cute. We had lunch, which was absolutely scrumptious.
The fourth destination was Choi Cham-Pan’s House: Filming location of the TV drama Toji (My land) Choi Cham House was situation on a mountain. This made the view from the peak magnificent. I was able to see the surround landscapes clearly. Again the colors of the season made the outlook appear extremely attractive and outstanding. There were also animals at Choi Cham- Pan’s House, which was nice. There were two pigs, a few rabbits and a couple of cows. I enjoyed stroking the pigs they where cute but a little smelly! We finished exploring Choi Cham- Pan’s House around 5.30. After this location we planned to travel to our motel. 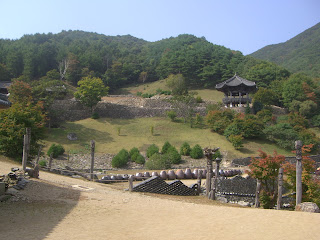 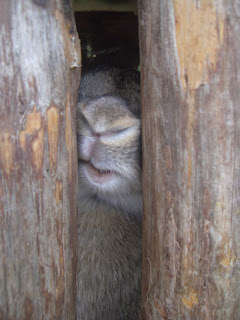 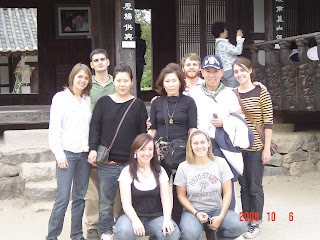 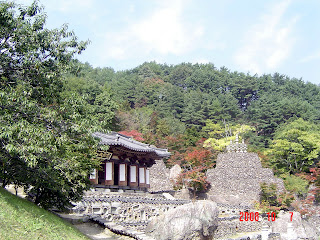 We arrived at our motel at six in the evening. The hotel was extremely satisfactory. Richard and Suzie arranged everybody to meet in the motel lobby at 8.00. We all had two hours so freshen up and recharge our batteries. After a little snooze and a refreshing shower I was ready for dinner. We had dinner in the motels main restaurant. The table was full of food that looked glorious. I was very satisfied at the end of the feast. After dinner we moved the party to the hotel’s basement. Where there was a cool nori bang. We all had an energetic time singing and dancing.  I believe this was an invaluable team bonding exercise and was greatly appreciated by all who attended.

Tuesday 7th October
I woke up at 8.40. We all set of for breakfast at 9.00. We stopped off at a restaurant and had a gorgeous soup for breakfast.
The next destination was Samseong Palace. The really name of the palace is Jirisan Cheonkakseonwon Baedalseongjeon Samseong Palace. The entrance for the palace appeared to be a mystical secret entrance to some kind of secret garden. The door was grand and built from steady colorless stone. Once in the grounds I was extremely intrigued by the agricultural domain. It was spectacular. There were magnificent walls build purely by with natural stone. The use of natural resources was mind-boggling. The creativity was indefinitely overwhelming. Once again the surround view from this destination was immense.
The final destination was Cheonghakdong. Cheonghakdong had breathtaking scenery as far as the eye could see. Here many visitors have said that Cheonghakdong is a good place to live or to find out a Utopia. This is understandable. Here at Cheonghakdong we had the honor of visiting a follower of Yubulseon-habil-gaengjeong-yudogyo. We listened to the monk, he told us about his visions of South Korea and North Korean uniting. He explained his vision for eternal utopia and his desire for harmony on earth. I thoroughly enjoy by time listening to Song Seng Nim. 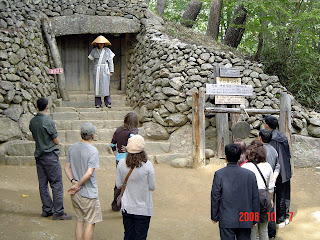 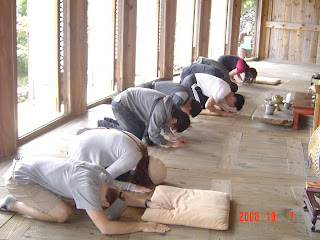 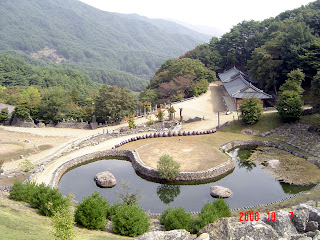 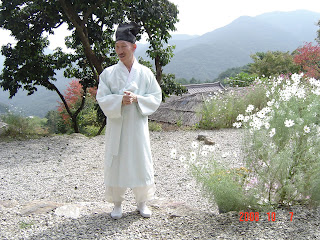 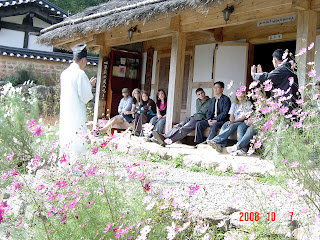 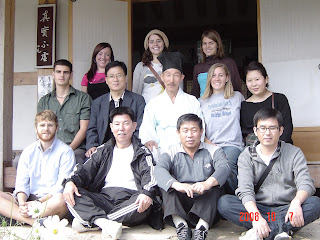 Overall the workshop was a wonderful cultural and historical experience. Furthermore the bonding within the team during this period was essential and helped team moral lots.
Posted by Becky & David at 10/30/2008